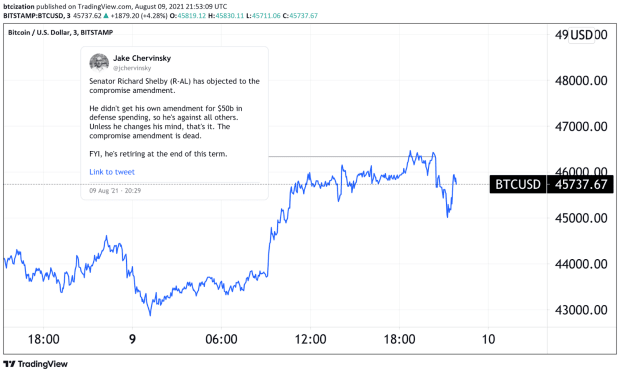 The bitcoin price fell slightly after an amendment clarifying cryptocurrency tax rules in the proposed U.S. infrastructure bill was rejected.

The below is from a recent edition of the Deep Dive, BitcoinLinux‘s premium markets newsletter. To be among the first to receive these insights and other on-chain bitcoin market analysis straight to your inbox, subscribe now.

In Friday’s Daily Dive, “Tik Tok, Impending Supply Shock,” we covered the supply and demand dynamics present in the bitcoin market, and stated how bitcoin was in a position to continue to run. While this has begun to play out (BTC/USD at $42,453 at the time of writing), we see this trend as continuing into the future.

“Demand for an absolutely scarce, inelastic monetary asset continues to increase, supply is getting pulled off the market at feverish pace, and price isn’t reacting.

“The market is finally starting to wake up.”
– The Daily Dive #037 – “Tik Tok, Impending Supply Shock”

Yesterday, the United States had a congressional hearing on the $1.2 trillion bipartisan infrastructure bill set to pass, with proposed amendments in the bill up for vote.

In particular, participants in the crypto industry were up in arms about the vague language used in the bill that could possibly subject developers and node operators to tax reporting that is quite literally impossible for said entities to report.

For any potential amendment to be made, unanimous consent would be needed, meaning 100 out of 100 senators would have to agree. Heading into the hearing at 3:30 p.m. EST, there was optimism that the Toomey-Lummis-Warner Amendment would be passed.

However, the Republican Senator Richard Shelby of Alabama objected, in what can be described as truly one of the most fiat moments possible.

Senator Shelby objected to the amendment because he was looking to increase the defense budget by $50 billion, and this was not included in the Toomey-Lummis-Warner Amendment.

Bitcoin sold off on the news, just to levels seen over the recent 24 hours, however.

As covered magnificently by Alex Gladstein, ironically enough, the very nature of the fiat monetary system is what subsidizes the military to become so large in the first place, as the true cost does not need to be fully financed solely via taxation, but rather through inflationary monetary policy.

Below is the federal government’s military spending over the 70-plus years:

The ultimate irony is that last-minute regulation being added to a bill in an attempt to hamper a budding industry run by individuals looking to peacefully reclaim their financial sovereignty from the state, only for amendments made to the initial proposal to be shot down due to the desire from one lawmaker to spend more on imperialism, is what prevailed.